Higher body mass index (BMI) – an indicator of obesity – in late adolescence is associated with a significantly higher risk of first ischemic stroke in men and women under age 50, regardless of whether they had Type 2 diabetes.
Even BMIs in the high-normal range are associated with increased stroke risk in both men and women.

During the follow-up period, for all 1.9 M participants between 2014 and 2018, researchers found:

Overall, 1,088 strokes occurred (921 ischemic strokes, 167 hemorrhagic strokes), and the average age at the time of the stroke was 41. Adolescent BMI was directly related to the risk of first ischemic stroke.
Compared to participants in the low-normal BMI group, adolescents who were in the overweight category had a 2-times higher stroke risk before the age of 50, and adolescents with obesity had a 3.4-times higher risk.
Even adolescents with BMIs in the high-normal range were more likely to have a stroke before age 50 compared to those in the low-normal BMI group.
After accounting for Type 2 diabetes, adolescents who were in either the overweight or obesity category still had a higher risk of stroke (1.6-times and 2.4-times, respectively) compared to people who had BMI values within the normal range. Stroke 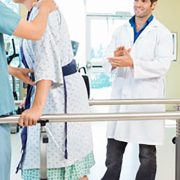 Link Between Gut Microbes and Stroke