When Rebecca Acabchuk was studying mild traumatic brain injuries while working on her doctorate in physiology and neurobiology at UConn, she met a student athlete who had suffered multiple concussions.

“When I started doing research on concussions, people just started coming to me,” Acabchuk says. “Families at my daughter’s school, anytime somebody had a concussion, I would hear about it – I would hear these personal stories and all the struggles of people who had concussions and their symptoms just didn’t resolve.”

So it was for the student athlete, who told Acabchuk that she would experience seizures when a smoke alarm went off in her dormitory.

“All of these symptoms she would have to struggle with – really profound symptoms – are an invisible injury,” says Acabchuk, who earned her PhD in 2016 and is now a post-doctoral fellow with UConn’s Institute for Collaboration on Health, Intervention, and Policy, or InCHIP. “People think you should be better, the injury happened so long ago. Why aren’t you better? And then more frustration comes in when your doctor says just to rest, there’s nothing else that can be done, but you’re still getting headaches or feeling fatigued or depressed.”

Chronic concussion symptoms are notoriously difficult to treat. But Acabchuk – who is also a yoga instructor in Hebron, and has been teaching yoga for 17 years – is hoping that a recently published InCHIP study, the first-ever meta-analysis looking at the use of yoga, meditation, and mindfulness-based interventions for the effective treatment of chronic concussion symptoms, will offer hope to those still struggling with their symptoms. The study was recently published in the journal Applied Psychology: Health and Well-being. 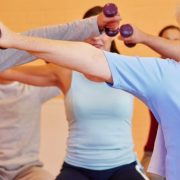 MBIs & Stroke
COVID-19 May Deepen Depression, Anxiety, and PTSD Among Pregnant and Postpartum...